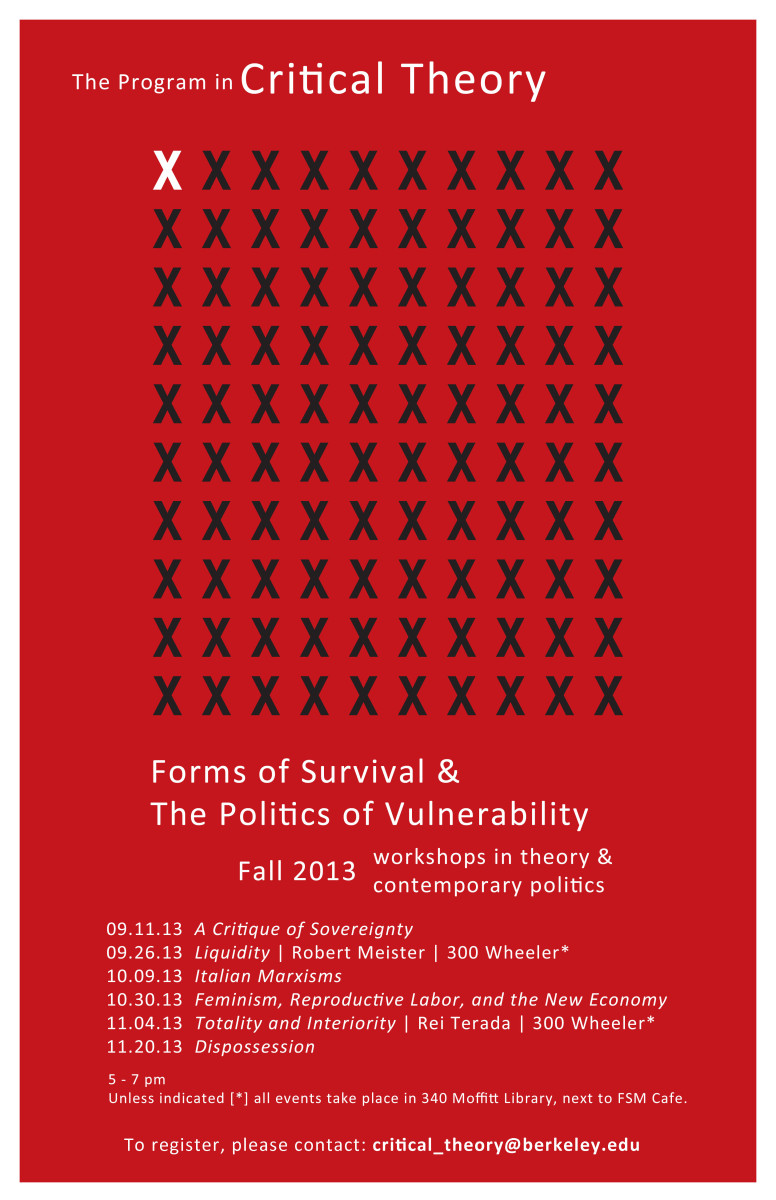 Forms of Survival & the Politics of Vulnerability attempts to re-think the notion of survival, which, though often associated with centuries-old evolutionary theory, has become central to contemporary political thought. As a point of convergence between biological need and economic necessity, the concept of survival seems particularly animated by the threat of ecological catastrophe, the spread of economic deregulation, and the rise of biopolitics. One might also think of Bourdieu’s observation—one that is not exclusively his—that neoliberal ideology is founded on a form of social neo-Darwinism. In addition to investigating how the discourse of survival might inform or be transformed by neoliberalism—a term on which we may want to put some pressure—we will consider how survival can at some times act as a license to force and at other times become the basis for popular resistance. It is the hope that these bio-economic inquiries might be joined with aesthetic-philosophical questions of form.

While turning an eye to survival in its most contemporary incarnations, we will also spend time thinking about vulnerability, not just as a natural or individual state of being, or as the obverse of the condition of being “fittest,” but as something that is structurally produced. Briefly stated, the nuclear question of the workshop asks how vulnerability and survival have been newly configured—and perhaps differently so in the global north and south—in light of the alleged withdrawal of the state and the recent dominance of finance capital.

The workshop is intended to be something like a hybrid between a reading group, a safe space for research in progress, and a philosophically inclined support group for those coping with and trying to understand capitalism now. Although the workshop is a gathering place for people with different disciplinary and intellectual commitments, those who have a particular interest in critical theory might think of it an attempt to forge a connection between an established, more familiar tradition of critique and an emerging body of contemporary social research.

Forms of Survival & the Politics of Vulnerability is developed and led by Michelle Ty (PhD candidate English, Designated Emphasis Critical Theory), with support from The Program in Critical Theory). Contact critical_theory@berkeley.edu for schedule and information.